Wine Education with Scott Richardson: To decant, or not to decant? 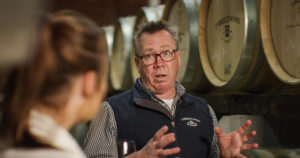 Putting it simply, decanting is essentially the process of pouring (decanting) the contents of a bottle of wine into another vessel (typically a decanter). Sometimes the wine is then served from the decanter but equally it is just as effective to decant the wine back into the original bottle for service. Today, decanting wines seems a somewhat arcane and old fashioned process rendered unnecessary by the increasing demand for wines designed to be drunk in their youth and less formal attitudes to dining.

So when to decant?

Firstly older red wines can throw off sediment as they age. Decanting your wine separates the wine from this sediment. Secondly, to decant is to aerate the wine. Aged wines can have a musty reductive character that will blow off with aeration. Many young wines (both red and white) are bottled with relatively high levels of dissolved gasses like nitrogen or carbon dioxide; this can render them tight or closed on the nose or palate. The splashing effect that comes from pouring the wine from the bottle to the decanter removes these gasses and takes in oxygen, which helps open up the aromas and flavors within the wine and softens youthful tannins. Eventually however the continued exposure to oxygen will have the negative effect of oxidising the wine. And herein can lie the confusion; how long do you let your wine “breathe”?

Trial and error is the only real way to learn. Highly extracted, heavily wooded youthful reds will benefit the most, whilst the more delicate aged whites (after the initial aeration effect) the least.

Believe it or not at the time of writing there is a current craze in the U.S.A for “hyper decanting”, i.e. putting youthful reds in a blender and blitzing them for 60 seconds thereby force-aging the wine(!!!)

To my mind red or white, young or old, all serious wines deserve and benefit from the decanting process – even if is only that it forces you to pause, slow down and prepare to concentrate on what you are about to taste.