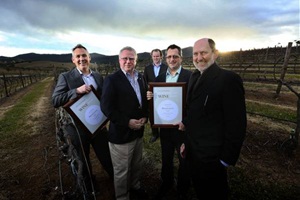 Although the gold didn’t shine for the Aussies at the London Olympics, the Tyrrell’s Wines team have made up for it receiving four trophies and 13 gold medals at the 2012 Hunter Valley Wine Show lunch held last Friday.

“We took a gamble with the 2012 semillons and finished picking a week later than most to ensure we got real flavour in the wines”, said Tyrrell’s Managing Director and fourth generation winemaker, Bruce Tyrrell.

While it was the semillons that took centre stage, Tyrrell’s chardonnays continued to shine taking out three of the five gold medals awarded for the varietal at the Show.

Considered of the best regional wine shows in the country, the Hunter Valley Wine Show introduced two major changes to the schedule this year – firstly one half of the show was dedicated to single vineyard wines to allow the diversity of soils and styles that the soils create to be more widely accessed.

The second change was the introduction of the Wine of Provenance Award, an award designed to celebrate the greatest wines of the region and their ability to age, improve over time and show a sense of place and style.  To enter the award each company was required to put forward three vintages of the same wine over a minimum spread of ten years. The youngest wine could be no more than three years old to ensure that the particular wine had a base in today.  Fittingly, Tyrrell’s 1999, 2006, 2009 Vat 1 Semillon and 1996, 2006, 2009 Vat 9 Shiraz shared the inaugural award.

“Receiving this award is a testament to the work we have been doing to further enhance the quality and definition of our top wines particularly the reds,” said Bruce Tyrrell

“I would have given up every other medal and trophy to be the first to be awarded these Wines of Provenance, as I believe the award rewards those wines that show a sense of place and have the ability to live and improve with real age, something not all wine regions can achieve.”