Wine Education with Scott Richardson: The history of the oak barrel 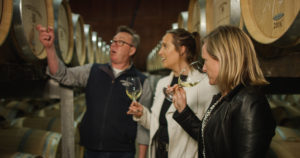 Apart from maybe a bottle or glass, no other image is as synonymous with wine as that of the oak barrel. But apart from evoking nostalgic thoughts, the actual historical development and modern practical uses of oak barrels remains an active mystery to many.

In historical terms, early wooden barrels were created solely due to the need for a sturdy storage vessel, something able to both store and transport liquids. Not just wine – but for any kind of trade good.

Wooden storage vessels, regardless of their design, have been around for quite a while. Predated by pottery or ceramic vessels by perhaps 10,000 years, wooden barrels co-existed alongside large ceramic vases sealed with pine resin, called Amphorae, for at least two thousand years. Herodotus, the early Greek historian of 500 BC was the first to record the use of palm-wood casks in shipping Armenian wine to Babylon in 2500 BC. However, wooden barrels were not used exclusively for wine. Just like their clay cousins, apart from serving as a receptacle for liquids such as water, oil, honey, vinegar and wine, they were also used in the storage and transportation of precious metals, nails, powders and minerals, as well as for the preservation of fish, olives, mustard and other sweet, salted or pickled foods. Barrels would have demanded a much greater investment of time, skill and material to produce compared to earthenware amphorae, but they were also a significant improvement. The barrel had a lighter, stronger design that formed a larger, sturdier container, richly rewarding the time and energy spent producing it with a longer lasting vessel. It also reduced the likelihood of goods being lost in transit due to breakages.

Wooden barrels of various designs have been in use for at least 4,500 years. Although it is not known who exactly invented the barrel, as we know it today, due to the perishable nature of timber. However, it is believed that the early Celts made the first wooden barrels similar to the modern style, after previously developing a more sophisticated method to shape wood for boat building. It is thought that these technologically advanced Celtic tribes were migrating west through Eastern Europe and Gaul (France) in around 600 BC, and in a happy quirk of fate they bumped into some Greeks from Phocaea who were founding a trading post in Marseille at around the same time. The Greeks introduced the Iron Age Celts to the grapevine and the French people’s love affair with wine was born. Wine predates the barrel but the hooped barrel as we know it today would have first held beer, as up to this point the Celts had yet to show any winemaking ability.

By 350 BC, the classic oak barrels that were capable of withstanding the stresses of being rolled and stacked were quickly adopted by the Romans, hastening the spread of these wooden vessels throughout the Roman Empire. However, the use of pottery was not simply abandoned; again the old technology existed comfortably alongside the new, as earthenware clay jars were by far easier and cheaper to produce. Therefore, while barrels were at the cutting edge of technology, clay amphorae were still the most commonly used technology. Yet, pottery was no longer the superior container.

By the waning of the Roman Empire, barrels had become ubiquitous and they remain in use today. The only real material to arise to rival the oak barrel in over 2000 years of winemaking is the recent development of stainless steel tanks. Before stainless steel, tank technology extended only as far as concrete or oak.

So why are oak barrels used specifically, when throughout history, other wood types, including chestnut, pine, redwood, and acacia, have all been used in the production of smaller transportable barrels and even the larger winemaking vessels?  Today there are a host of reasons to use oak, many of which remain arcane even to the most experienced winemakers, but 2000 years ago, oak had two major advantages over it’s competitors. Firstly, oak was in large supply; Europe was literally groaning under the weight of temperate oak forest, and, secondly, its tight grain helped to keep the barrel watertight. It was simply the best timber out of which you could create a watertight vessel. Navy and trading fleets were built from oak for the very same reason.

The fact that oak also initially imparted pleasant, spicy flavours wine would have also been noted but the brief amount of flavour the barrel offered up would have been seen only as a secondary benefit, a fleeting thing in comparison to a barrel’s overall working life. Instead, what was most appreciated was that when the wine had been stored in an oak barrel for a period of time, even if the barrel was older with no discernable flavour, the wine seemed to change and mature into a more approachable and pleasant beverage.

The marriage of oak and wine has therefore developed over time. Initially oak was chosen for its watertight qualities in storing wine. Overtime, winemakers discovered the ability of oak to soften, clarify, stabilise and add structure to wine.