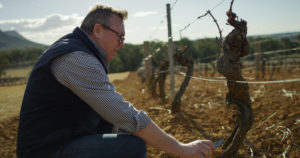 Grape vines’ can and do produce fruit in their very first year but it generally takes between four and seven years to get fruit decent enough to make tolerable wine, 10-20 years to achieve a balanced vineyard and 40 years to make truly exceptional wines.

The grape vines youth can be described as being vigorous but erratic, achieving “balance” somewhere between 10 and 20 years of age. Balance in grape vines is very important and it relates broadly to the vine producing just the right amount of fully mature fruit to make great wine, with the right amount of working canopy area to drive the ripening process without any excess or deficiencies. Dry grown with deep root systems, old vines also remain steadier through seasonal variation. In a rainy harvest, a young vines shallow root system sucks up surface water, bloating the grapes and diluting flavour. Yet old vines are often surprisingly unaffected, as their deeper roots are untouched by a passing rainstorm. In drought conditions those same deep roots can tap into water reserves well down in the subsoil, unreachable by younger vines.

“Less is more”, most easily defines the relationship between crop yield and flavour. And before you write in; I acknowledge that this is an oversimplification and it discounts with the ratio of working leaves to bunches, but for the sake of brevity – it is a generally considered “truth” that the lower the crop yield the more intensely flavoured the wine – the higher the crop yield the more dilute. Unfortunately, for you and the grower, the cost per hectare of growing the grapes is relatively static, so by reducing the crop yield by half you can double the cost of growing the grapes. After about 40 years the vines average crop yield stabilises and levels of intensity in the finished wine increases. However, just as the flavour compounds created become more concentrated, so does the cost per tonne to grow it. Older vines produce better wines but they are more expensive to grow. The vast majority of wines under $15 come off younger vines planted on the fertile irrigated flood plains of the M.I.A, Riverland and Riverina. These three areas account for almost 65% of Australia’s total wine production. Older vineyards are rare, as for many growers they just become uneconomical.

So how old rates as old? – In newly established wine regions, 20 years may be seen as being old, but in places where winemaking has been longstanding, it often means vines that are at least 40 years old. It may come as a surprise to many Europeans that the new world, and Australia in particular, has a disproportionately high number of the world’s oldest productive vineyards. The grapevine arrived in Australia in 1788 and the first plantings in the Hunter Valley date from around 1830, making it the oldest commercial wine region in Australia. All these cuttings came from European vineyards and they were planted in the traditional way, on their “own roots”. In the 1850s a root-sucking aphid like insect called Phylloxera made its way from America to Europe with devastating effect. Around 6.5 million acres of vineyards were decimated by this parasite, over 40% of Europe’s vineyards ruined. The problem continued for decades without relief until it was discovered that North America had its own species of grape vines that were naturally resistant to the parasite. While the European and American vines are distantly related they still had enough in common to allow one to be grafted upon the other. The outbreak could be managed simply by grafting the European vines on top of American vine roots, giving us root stocks.

The important part of all this is the difference in having vines that are on their “own roots” and those that are on root stocks. Apart from affording protection against soil born pests like phylloxera and nematodes, rootstocks have also been bred or selected to better suit specific soil types. Whether you have saline, acidic, clay, limestone or drought ravaged soil profile there is now a rootstock to match, and more significantly to increase your crop yield, typically resulting in twice the number of kilos per vine compared to those on their own roots.

But there is always a cost. As I mentioned earlier, an increased crop yield means a decrease in intensity of flavour. Ungrafted vines tend to produce wines much darker in colour, lower in pHs and with a greater intensity of flavour. In short, the ungrafted wines have significantly better ageing potential. We have those vines!!! Australia’s oldest vineyards were planted from the original French and Spanish pre-phylloxera cuttings. Cuttings are effectively just clones; they share exactly the same genetic material. You don’t plant vineyards from seed as the result will be genetic roulette. Once you have the right type of vine for your soil/climate/region your can continue to take cuttings from it until you have built up an entire vineyard. Vineyards are made up of thousands of copies of the one vine. Our vines are the same as the original European varieties; they carry the legacy of 10,000 years of selective breeding. They were planted on their own low yielding roots and on top of that they are OLD.

Australia wasn’t entirely immune to Phylloxera but the Hunter Valley, South Australia and Western Australia were all spared, meaning that Australia – and the Hunter in particular – has the largest acreage of old vines on their own roots in the world. Northeast Victoria, McLaren Vale and the Barossa can also claim the same.

At Tyrrell’s Ashmans property in the Hunter Valley, the average age of our vineyards is over 60 years, with five blocks of vineyards well over 100 years and all producing extraordinary wines. These vines are all planted on their own roots and are all “dry grown” (unirrigated). The oldest vineyard on this property, the 4 Acre block, was planted back in 1879, and in a normal year this vineyard produces a bit over one bottle per vine. The oldest vineyard in the Tyrrell’s stable and in the Hunter is the Old Patch, planted in 1867.

So next time you head to the Hunter visit Tyrrell’s, grab a glass, go and look at one of our old-vine vineyards and know that no one else outside of Australia can do what you’re doing.