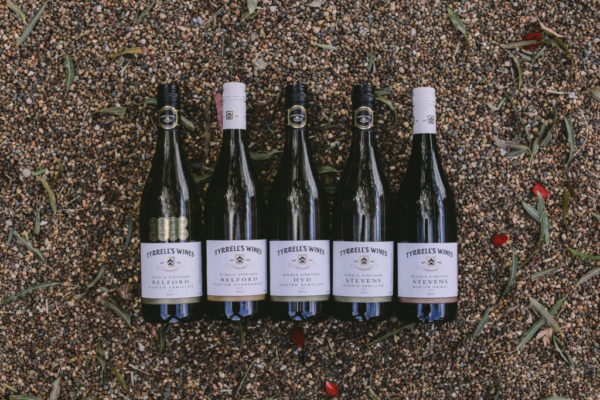 From 2018, Tyrrell’s Wines will be celebrating their new vintage of Single Vineyard wines by releasing them annually on the 1st October.

The demand for these small production wines has begun to outgrow their unique vineyard sources and this is our way to celebrate the new releases and ensure consistency of supply.

One of Tyrrell’s most important releases of the year, the Single Vineyard wines celebrate the greatest wines of the Hunter and their ability to age, improve over time and show a sense of place.

The microclimate of each vineyard produces a wine which is unique and shows a true connection to the soil. Our Single Vineyard wines are only made in years when nature contrives to produce fruit of such outstanding quality that these unique parcels are set aside to be separately bottled.

Our Semillon releases are from the 2013 vintage, and Chardonnay from 2016. The 2013 growing season was uninterrupted with dry conditions into the new year which resulted in smaller crop levels. The week before harvest we had a large rain event followed by dry weather, which allowed the grapes to perfectly ripen. The best wines of the vintage were made after this rain.

The red releases are from the 2016 vintage, which started with great promise with our wettest winter in nearly a decade. Perfect conditions for budburst and flowering were followed by an unsettled summer consisting of hot days and wild storms. Luckily these weather patterns calmed down into one of the driest Februarys on record.

2013 Stevens Semillon
Sourced from Neil Stevens’ Glenoak vineyard, which features a combination of light sandy loams and transitional darker, heavier soils. The oldest plantings on this vineyard are from 1911. Grapes were picked in the early hours of the morning before being lightly pressed. Fermentation in stainless steel at cool temperatures with some time on yeast lees before bottling.

2013 HVD Semillon
The HVD Semillon is only ever sourced from the ‘Sign Post’ block which was planted in 1908. The vineyard lies between two dry creek beds and the vine roots generally always have access to water. The grapes were handpicked and then lightly pressed, and only the free run juice was used. The juice was fermented in stainless steel tanks at cool temperatures. After fermentation the wine spent a short time on lees before being bottle in July.

2013 Belford Semillon
The Belford vineyard is located 10km northwest of the winery and was planted in 1933. It is the further vineyard from the Brokenback Range and has the most broken down sandy loam soil. Its consistency is similar to that of talcum powder. The grapes were handpicked and then lightly pressed, and only the free run juice was used. The juice was fermented in stainless steel tanks at cool temperatures. After fermentation the wine spent a short time on lees before being bottle in July.

2016 Belford Chardonnay
The handpicked grapes, sourced from vines planted in 1994, were immediately basket pressed before going into stainless steel for 3 days. Once fermentation began the juice was transferred to French oak barriques, of which only a tiny percentage was new. The wine remained in oak for 10 months before bottling.

Old Hut Shiraz
The Old Hut vineyard is situated right next to the 4 Acres and it was planted in 2003 with cuttings from the best vines in the 4 Acres vineyard, which dates back to 1879. The handpicked grapes were fermented in stainless steel close top tanks before being matured in mostly older French oak puncheons for 15 months.